Poppers effects & general information
Cookie preferences
This website uses cookies, which are necessary for the technical operation of the website and are always set. Other cookies, which increase the comfort when using this website, are used for direct advertising or to facilitate interaction with other websites and social networks, are only set with your consent.
Configuration
Technically required
These cookies are necessary for the basic functions of the shop.
"Allow all cookies" cookie
"Decline all cookies" cookie
CSRF token
Cookie preferences
Currency change
Customer recognition
Customer-specific caching
Individual prices
Selected shop
Session
Comfort functions
These cookies are used to make the shopping experience even more appealing, for example for the recognition of the visitor.
Note
Statistics & Tracking
Affiliate program
Google Tag Manager
Track device being used 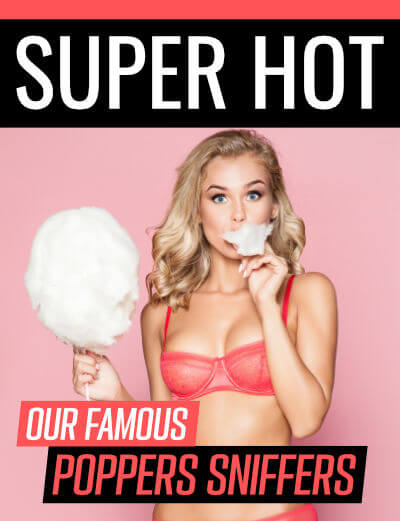 Categories
THIS IS HOW YOUR PACKAGE COMES TO YOUR HOME

THIS IS HOW YOUR PACKAGE COMES TO YOUR HOME

All poppers aromas offered here in our shop are room fragrances and should not be inhaled directly from the bottle! We hereby distance ourselves from the improper use of these products. The sale of aromas in our shop is only available to people over the age of 18!

In the media, flavors are also often referred to as poppers. In the following text we would like to inform you about the history of poppers, their effects and how to use them safely. Please read carefully the section "Safer Use of Poppers"

What are aromas or poppers?

The collective term poppers is a colloquial term for a group of nitrites that are mostly used as pleasure-enhancing fragrances in liquid form.

Nitrites are the salts and esters of nitrous acid. They were first synthesized in the 1940's and 1950's. Amyl nitrite has been used to treat angina pectoris, a narrowing of the coronary arteries.

In the case of poppers, the effect as a medicinal product was based on the short-term expansion of the coronary arteries to relieve angina pectoris symptoms. The nitrite compounds are also suitable for vasodilatation and thus for lowering blood pressure. Due to the limited duration of action, diluted nitro-glycerine is nowadays commonly. But precisely because of the manageable duration of action, nitrites, especially butyl and isobutyl, were rediscovered as aphrodisiac in the 1970s. Since then, they have been known as poppers and are now an important part of products known as ingredients in room fragrances or video head cleaners.

The name Poppers is derived from the English verb “to pop”, in German “pop”. This is due to the characteristic sound when the original Poppers ampoules were opened.

Initially, the aromas were mainly used for sex in the gay scene. Today, however, they are also very popular with heterosexual couples.

The possession and use of isopropyl nitrite is currently legal in all countries inside the EU !! Poppers are not drugs! The UK government decided on March 22nd, 2016 that poppers are not covered by the Psychoactive Substances Act and can therefore can continue to be sold legally. You can read the letter from the Home Office Minister here.

To be on the safe side, please check your national legislation if you plan to resell or give away isopropyl nitrite.


Poppers: effects on body and mind

The fact that poppers are described as lust-increasing substances is due to the stimulating and pain-relieving effects that are also attributed to the aromas. They are based on the sudden expansion of the blood vessels as described above. As a result, the arterioles (small blood vessels in the heart) relax, which leads to a drop in blood pressure with an increased pulse and to a temporary lack of oxygen in the brain. The drop in blood pressure lasts for a maximum of 30 seconds; after about 2 minutes the blood pressure is back to normal.

Poppers effect: The resulting increase in sensitivity and relaxation of the muscles leads, among other things, to a ...

Poppers and the effect on the mind

The consumption of poppers can lead to a high with feelings of happiness. The intoxication is experienced as deep muscle relaxation and insensitivity to pain and leads to a changed acoustic and visual perception.


Poppers and their effects with other substances

Poppers: Effects and Basics
The risks associated with the consumption of several substances at the same time are higher than with single-consumption. Both body and psyche would significantly more distressed. The effect of poppers to individual substances can be strengthened or weakened and interactions occur with a time delay. Even completely unexpected effects can be possible as poppers.

Poppers: Effects with sexual enhancers
Poppers must never, under no circumstances, be combined with Viagra, Cialis, Levitra or other sexual enhancers from the range of the PDE-5 inhibitors: It is life-threatening, as it can lead to a sharp drop in blood pressure or even fatal cardiovascular arrest.

Poppers: Effects with other aphrodisiacs (e.g. Kava Kava or Damiana)
A strong cardiovascular load is possible.

Poppers: Effects with downers (example: heroin, ketamine, benzos, laughing gas)
The depressant effects of these substances are heightened and there is an increased risk of unconsciousness, respiratory failure and falling into a comatose state.

Poppers: Effects with GHB / GBL / BDO
The strong blood pressure lowering and respiratory reducing effect of this combination can lead to vomiting, a coma-like deep sleep, unconsciousness and respiratory paralysis. An overdose can be easily achieved by mixing these two components.

Poppers: Effects with drugs
If you are already taking medication for low blood pressure (hypotension), epilepsy, angina pectoris, cardiovascular or respiratory diseases, you should by no means consume substances that are inhaled. A combination of these substances can lead to a sudden and life-threatening drop in blood pressure. In particular, taking nitrate-containing drugs such as NO donors (e.g. nitrolingual spray) is very risky here.

The application of the following safer use rules can help to minimize risks when using poppers:

Under no circumstances use poppers if the cardiovascular system is preloaded, cardiac arrhythmias, heart valve defects, a weakened heart muscle, concussions or traumatic brain injuries and arterial widening (aneurysms), as well as during pregnancy. Some consequences can be life-threatening.

Poppers: Do not drink under any circumstances - life-threatening!
If poppers are accidentally swallowed, drink water immediately. Never induce vomiting, otherwise the oesophagus and throat could get even more corrosive. Call an emergency doctor immediately. Avoid contact with skin, mucous membranes and eyes. If contact does occur, you should rinse the affected areas with cold water for at least 20 minutes and consult a doctor to treat possible burns!

The consumption has a sexually stimulating effect on many users and the risks associated with unprotected intercourse are no longer taken so seriously. Always put on a condom before using poppers! Poppers are easily flammable and the  vapours contained inside are explosive - so be careful when handling lighters, cigarettes, candles, etc.!

Poppers effects: never use during pregnancy or breastfeeding!
Poppers can be extremely harmful to the organism of unborn babies or small children.

Poppers lose their potency at room temperature. For this reason, they are usually kept in a tightly closed in the refrigerator. When moisture mixes with the nitrites - and this happens when the bottle is taken out of the refrigerator and opened before it has reached room temperature - the nitrites decompose within a short period of time and start to smell very unpleasantly like hydrogen sulphide (rotten eggs).

Some types of aroma contain small ceramic balls (power pellets) that can bind the slightest traces of water and thus keep the contents pure and fresh. The differences in the strength of the various brands are up to the individual as everybody experiences poppers differently but many of our customers swear by the original RUSH® PWD.

Avoid mostly cheaply produced "house brands" (except in trustworthy shops) or plagiarism from other poppers shops or your own experimental mixtures! Only originally sealed branded goods are guaranteed to be clean and pure! Pay attention to the ® and ™  trademarks. Clean and fresh poppers have a weak, pleasantly aromatic or fruity smell!

If you have further questions about our poppers flavours, please contact our service.

Viewed
This website uses cookies, which are necessary for the technical operation of the website and are always set. Other cookies, which increase the usability of this website, serve for direct advertising or simplify interaction with other websites and social networks, will only be used with your consent.
Decline Accept all Setting